The cold square tiles of the band room floor stared back at me blankly, their lack of a logical pattern oddly disturbing. Puddles of spit from the trombones were drying leaving a white border of DNA infused grossness. Down the hall a student played the opening to Fur Elise incessantly on an unweighted keyboard. The conversation with my assistant band instructor seemed awkward and not headed down the path I had expected. Really? Put down my trumpet for two weeks and call you?

18-year-old students shouldn’t feel required to make up their minds about what they want to do when they ‘grow up’. According to a 2015 study by the Bureau of Labor Statistics, young Baby Boomers changed jobs about 12 times between the ages of 18-48. Throw in multiple career changes and the idea of a young kid deciding what to do with their life borders on the ridiculous. “You have all of the talent to make it as a professional trumpet player,” he said. “But I’m not sure you have the desire to get there.”

Two weeks later I called him…
“Okay, it’s been two weeks, now what?”, I said.
“When was the first day you picked up your trumpet?” he said.
“You told me to wait two weeks and call you.”
“Go into communications.” was his reply.

Mr. Wilfert, as it turns out, knew of which he spoke. I went on to major in communications with a concentration in Journalism and Radio / TV / Film and found a myriad of ways to keep music in my life.

– I spent 10 years as a DJ (radio, nightclubs & bars) focusing on bringing new artists into the mainstream
– I sang periodically with some no-name garage bands
– Years later, I picked up my trumpet again and now play in a brass quintet in church

However, outside of watching my very musical kids perform, the area where I get the most enjoyment out of music these days comes from focusing my lens on the musicians and artists who at the age of 18 needed to pick up their instrument on that very first day.

Rise Against!, Metric and the Silversun Pickups

The Who, Royal Teeth and others 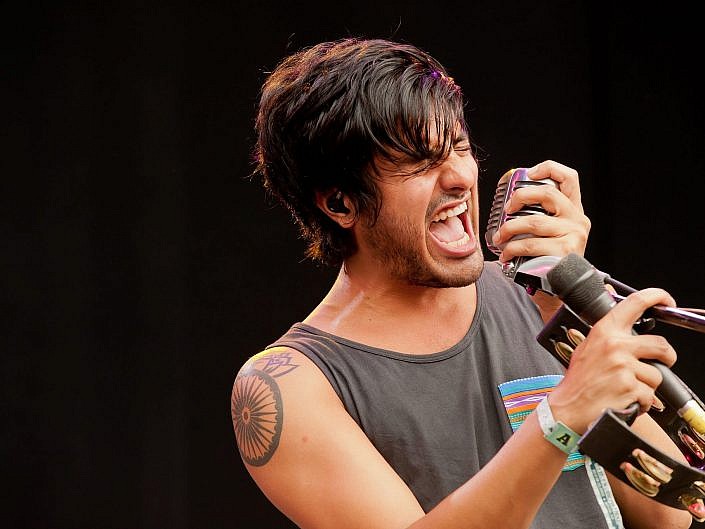